A sense of living tradition

Family. An important concept. For our house. For our hotel. From a sense of tradition. Old values. In fast-paced times. As long as anyone can remember, GOLDBERG people have attached immense importance to trust, to cohesion. And to respect. And so, people gather here from around the world.
In order to live out their passion at DAS.GOLDBERG. The great passion, of being there for others.

Retrospective. And perspective. Of golden times.

The former building, the Pyrkerhöhe, was first chronicled back in 1905, as a farm with its own country inn. A popular spot, especially for summer holidaymakers and visitors “taking the cure”.  Here, high above Gastein Valley. Due to the premature death of the then owner, Katharina and Peter Seer were able to purchase the property in 1981. Having grown up in neighboring Grossarl Valley in very impoverished circumstances, they saw their future in this business. Which they went ahead and renovated, adding 24 rooms.
In 1997, son Georg and his wife, Vera, took over. Their goal was to rebuild the hotel from the ground up. After 10 years of negotiations, the time had come. With ten additional hectares of land made available by the village to bring the project to fruition. On 1 September 2012, the old building was demolished, and on 19 July 2013, the DAS.GOLDBERG was opened.

Perspectives. On golden times.
Through our nature & design hotel DAS.GOLDBERG, we want to pull the threads of history together. And celebrate countless stories. Of the golden age of Gastein Valley. The story of the Seer family. And the stories of our guests. 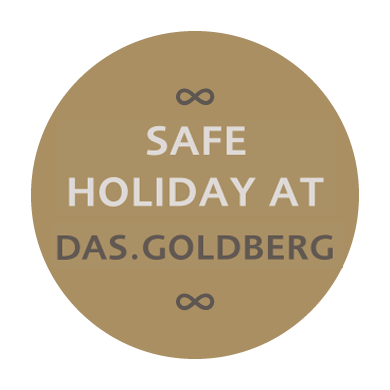